Om Sterling Global University was established in March, 2019. It is promoted by Om Welfare Society Registered under Society Registration Act, Bearing number 00353 Dated on 17/10/2013 and is dedicated to achieve its vision, mission and objectives through academic excellence in all areas of knowledge and skills. The university is spread over 30 acres of fully-developed institutional land with a lush green campus, modern infrastructure and excellent academic atmosphere. Inspired by its vision and mission, the campus has been designed and developed with great sense of aesthetics to provide eco-friendly environment and ambience to provide comfort and zeal for learning. As a temple of education, the University aims at producing world class academicians, researchers and leaders in diverse fields by embedding high moral values in its students, commitment to excellence, and enthusiasm for continuous intellectual development.

Why Study at OSGU?

OSGU is a place of education and overall development which never fails to render quality to the students. The faculty is impeccable and understands the value of education in various aspects of student lives. The campus as well is well-occupied with classrooms and essential laboratories to ensure that the students get what they need.

Apart from the curriculum, there are several other activities that take place in the campus and are encouraged as well; such as sports and arts. Whatever the student is good at, we thrive to make them the best at it. The students are a priority not only because they will represent OSGU later but also because they form the future of the country. Come to OSGU, learn to become the best.

What Makes OSGU So Exemplary?

Hisar is a wonderful and historic city and Om Sterling Global University is based in this city. With lavish campus and twelve school that render top-notch programs, OSGU has earned itself a recognition in the country as well as across the border. It is considered a privilege by many of being a part of this esteemed educational organization.

Overall development of the students is made a priority bettering them with personal as well as professional skills. They are prepared to succeed in their chosen career paths with individual attention from the faculty. OSGU thrives to make people’s lives better by contributing young and sharp minds to various fields.

OSGU Is More Than Right For You, Here’s Why -

Reputed, professional and disciplined work culture for quality education. The faculty knows how to prioritize the students and their development.

Content beyond Syllabus for learning latest technological trends. With up to date knowledge of the technology, the students get prepared for the rapidly growing world.

Effective Teaching- Learning Process. Students don’t only learn here they also get a chance to share their knowledge and enlighten the fellow aspirants.

Digital Library with dedicated server having VODs from NPTEL and a sufficient amount of e-study material. Apart from textbooks, the students will have access to much deeper knowledge of the field.

Continuous Assessment of Students, Regular Teacher- Guardian Interaction and Career Counselling. Students’ progress is tracked and they are encouraged to do better wherever they lack.

Excellent University Results, University merit position of students. There is history of great results achieved by the alumni and how the current batches thrive for the same.

Rewards and Scholarships to meritorious Students, Special attention towards weak students and financial help to needy students. No one is left out, every student is given the required attention helping them grow in every possible way.

IIT Mumbai remote center set up at OSGU campus for National Mission on Education through ICT for empowerment of students. Faculty from OSGU regularly visits various IITs for training on latest technological trends.

Incubation centre at campus of Daffodil Software Ltd. The students will get the training and jobs they deserve.

OSGU is a partner in various Industries – Academia Programmes of reputed companies. The skill development programs are organized for students to enhance the employability.

International Relation Office (IRO) to look after activities such as student /staff exchanges and visits and collaborative initiatives. This opens up several opportunities to the students.

Professional Society Activities and Entrepreneurship Development Programs for students which allow them to get ready for the business.

Campus- Recruitment Training & Personality Development Programmes for students. Opportunities are provided at hand to the students to help them kick start their career.

Dedicated Training & Placement Cell. The faculty cares as much of the students’ placement as their academic development.

In-House Publication Company and International Research Journal. This encourages the students to be dedicated to their passion and stream of career.

Computing facility of about 1000 computers is available for students with internet connectivity, which is also used for on-line examination. Wireless connectivity is provided in campus and hostel.

On campus air cooled boys & Girls hostel with a capacity of 400 students with facilities such as ultra-modern gymnasium, library and 24 x 7 internet connectivity and power back up.

Almost Free Education for SC/ ST students (As applicable in PMS and SC/SP Schemes). Everyone gets their right to education.

Wi-Fi, EPBEX, LAN and Internet connectivity throughout the campus. To help the students advance and promote self-learning.

Special Scholarship plans for girl students to help support their families and themselves. 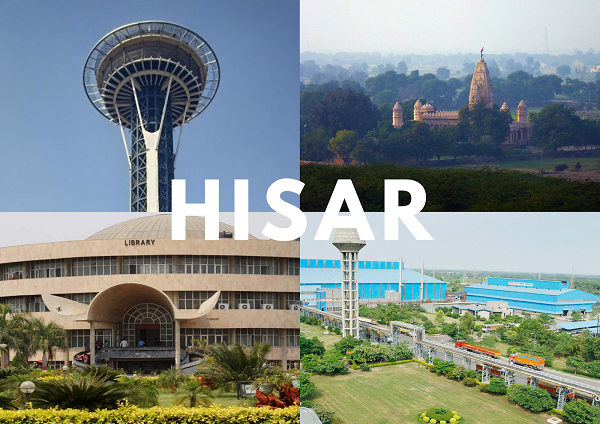 Hisar is also spelled Hissar. It’s a city in northwestern Haryana state, northwestern India. It is situated 164 Km west to Delhi on the National Highway 10. It has become one of the most important districts of Haryana. It has a population of 12,30,000 as per 2001 census. Hisar has very hot summers and very cold winters. The maximum day temperature during the summer varies between 40 and 46 degree Celsius. During winter, the temperature ranges between 1.5 and 4 degree Celsius.
Hisar was founded in 1356 by Fīrūz Shah Tughluq and later became an important Mughal centre. Depopulated in the 18th century, it was occupied later in the century by the British adventurer George Thomas. Hisar was constituted a municipality in 1867. The city is surrounded by a wall with four gates and contains the remains of Fīrūz Shah’s fort and palace and several ancient mosques, including the Jahaj, now a Jaina temple.

Hisar is the major rail and road junction for the region and it’s well connected to Delhi, and Chandigarh. City Transport has metered rickshaws, taxis, and local buses. Hisar is an education hub in Haryana for higher education. Chaudhary Charan Singh Haryana Agricultural University is one of Asia’s largest agriculture universities. Guru Jambheshwar University is Haryana’s first technical university. Om Sterling Global University is the first private University in Hisar established in the year 2019.
Hisar is one of the important and fast growing urban centers of Haryana. The government’s positive policies have played a vital role in the economic development of the city. The industrial policy of the government has attracted large number of entrepreneurs and has resulted into the industrialization in and around the city. Hisar is a divisional headquarter of the Divisional Commissioner. It is also a battalion headquarters of B.S.F. and commando force. The new Judiciary Complex in Hisar is largest in Haryana. It is now an important industrial center of Haryana having lots of Steel and Cotton industries. The availability of infrastructure facilities like industrial space, power water, transport, telecommunications, labour and financial assistance have led to the Industrial growth of the area. Hisar is known as the Stainless Steel City of India. It has grown to a vital position on the urban map of Haryana. The city is catering to the needs of not only the population of the district but also to the population of nearby states of Rajasthan and Punjab. Students from all over the country come to Hisar to receive good education make their career.
Its industries include cotton ginning, hand-loom weaving, Pharmaceuticals, MS Pipe, PVC Pipe, Cement, Paper/Paper Product, Chemicals, Ceramics, Textiles, Agri products, Repairing work shop, Steel and wooden, Furniture, Paints, Utensils, Rolling mills, Engineering items, Leather shoe etc.
Hisar is a good visiting place for tourists. It has many historical places and picnic spots to visit. Some of the famous places to visit are- Jain Pillar, Jahaz Kothi, Gujari Mahal, Bishnoi Mandir, Humayun’s Mosque, Feroze Shah’s Palace And Fort, Lat Ki Masjid and Pranpir Badshah’s Tomb. Some of the rare species of birds like Flamingo, Blue Bird and Black Bird could also be seen in Hisar.